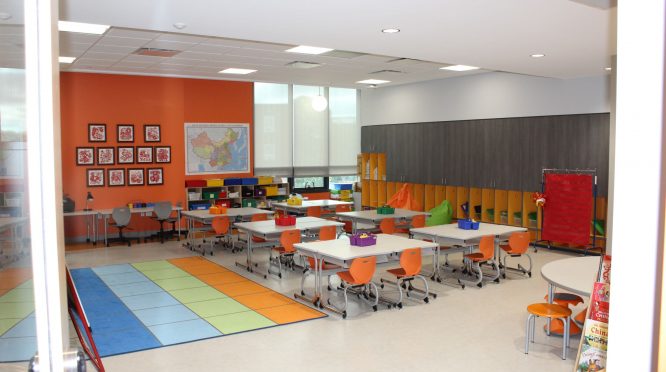 Global Engineering Solutions (GES) provided MEP & FP engineering services for the renovation and addition to the Maury Elementary School. The original building was built in 1886 with an addition and ground-level causeway constructed in 1961. The project includes a new addition to house a new kitchen and servery as well as additional classroom space, and an upgrade of the HVAC system in the 1960’s addition. Particular attention was paid to maintaining and preserving historic elements of the building.

The Heat Recovery Variable Refrigerant Flow (VRF) Air-Cooled System is a two-pipe fan coil system which utilizes incremental room units with a combination of a fan and a single heat transfer coil used for both heating and cooling in a common enclosure. The system design is based on a modular design concept which gives the user the ability to zone the cooling and heating loads of the building based on space usage and operation. Energy efficiency is realized in part by the ability to zone the systems based on building usage as well as on the ability to control individual spaces within the separate zones. Since each zone is controlled individually, the system has the ability to shut down areas that are unoccupied while still providing the required cooling or heating necessary for the occupied areas.